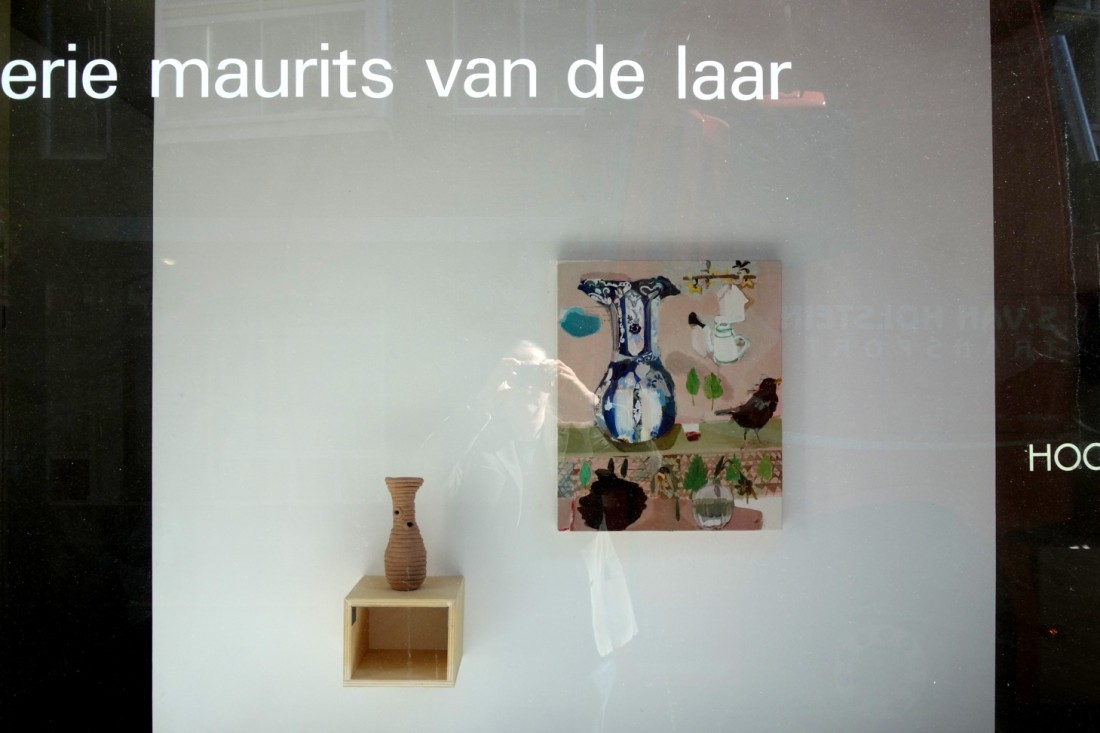 Albrecht’s ceramic works all have a character of their own, and if you see more of them they are a sometimes awkward but intriguing company.

They are vases that don’t want to identify as vases.

They are a bit like human beings who are constantly worried about their identities, while they still remain human beings after all.

They are also works that go back to the historic basics of ceramics, in which pottery was not just practical but also spiritual.

They fit in very well with Freckmann’s paintings of interiors, in which they now and then appear.

You may call them genre paintings, but that sounds much too stuffy and old-fashioned for Freckmann’s interiors which are full of wonder and magic.

Birds play an important role in these interiors, but also in smaller paintings which come as a kind of extras to the big ones.

Especially the blackbird seems to be a favourite of Freckmann’s, as a messenger from the outside world, with its pride, constant attentiveness and its lyrical singing.

Here you see the blackbirds as far as i could spot them in the show; it’s up to you to find the paintings they belong to.

Apart from blackbirds there are more birds in the paintings; i spotted song thrush, white wagtail, blue tit, nuthatch, tree creeper, robin, jay, African grey parrot, an indefinable  song bird species, a kind of gull, a decorative bird and the swallow of the famous matchbox.

They intermingle with Albrecht’s vases and with other objects, who, in spite of their different characters, become part of the fabric of both the real world and the interior world.

Now that you’ve come here, you might as well subscribe to Villa Next Door (top right of the page)!

(All links open in new tabs)

VILLA NEXT DOOR IS NOT RESPONSIBLE FOR ANY ADVERTISING ON THIS PAGE!!

Advertisement
Follow Villa Next Door 3 on WordPress.com
Adding an RSS feed to this site’s homepage is not supported, as it could lead to a loop that slows down your site. Try using another block, like the Latest Posts block, to list posts from the site.